Vegetables can sometimes be difficult to prepare, especially when you are cooking an elaborate dish. To avoid spending unnecessary time manually chopping or peeling the ingredients, you might want to invest in a vegetable chopper instead. When it comes to onions, you will find that the market offers a wide range of onion choppers to choose from, each with its own features and particularities.

Having taken into consideration everything the market has in store, we put together a list of the ten best onion choppers money can buy for you to look at.

Considered as the world’s quickest chopping tool, the GEFU Cubico Cube & Onion Slicer can slice your fruits and vegetables into perfect pieces in a matter of seconds. Giving you precise cuts, you can now cut tear-free onions, fruits, and vegetables with ease.

This kitchen tool comes with a catch plate with a lid that can be dismantled and utilized separately. Made from high-quality stainless steel, it features a special European design and construction that is both sleek and stylish in nature.

Uniquely designed with retractable knives that change its position with every chop, the ZYLISS ‘Zick-Zick’ Handheld Food Chopper is the ideal tool for dicing and chopping all kinds of herbs, fruits, and vegetables.

Equipped with a special plunger technology, you can enjoy effortless, comfortable chopping. It comes with a large storage capacity that can hold a good amount of chopped food. The device can easily be dismantled and cleaned efficiently. 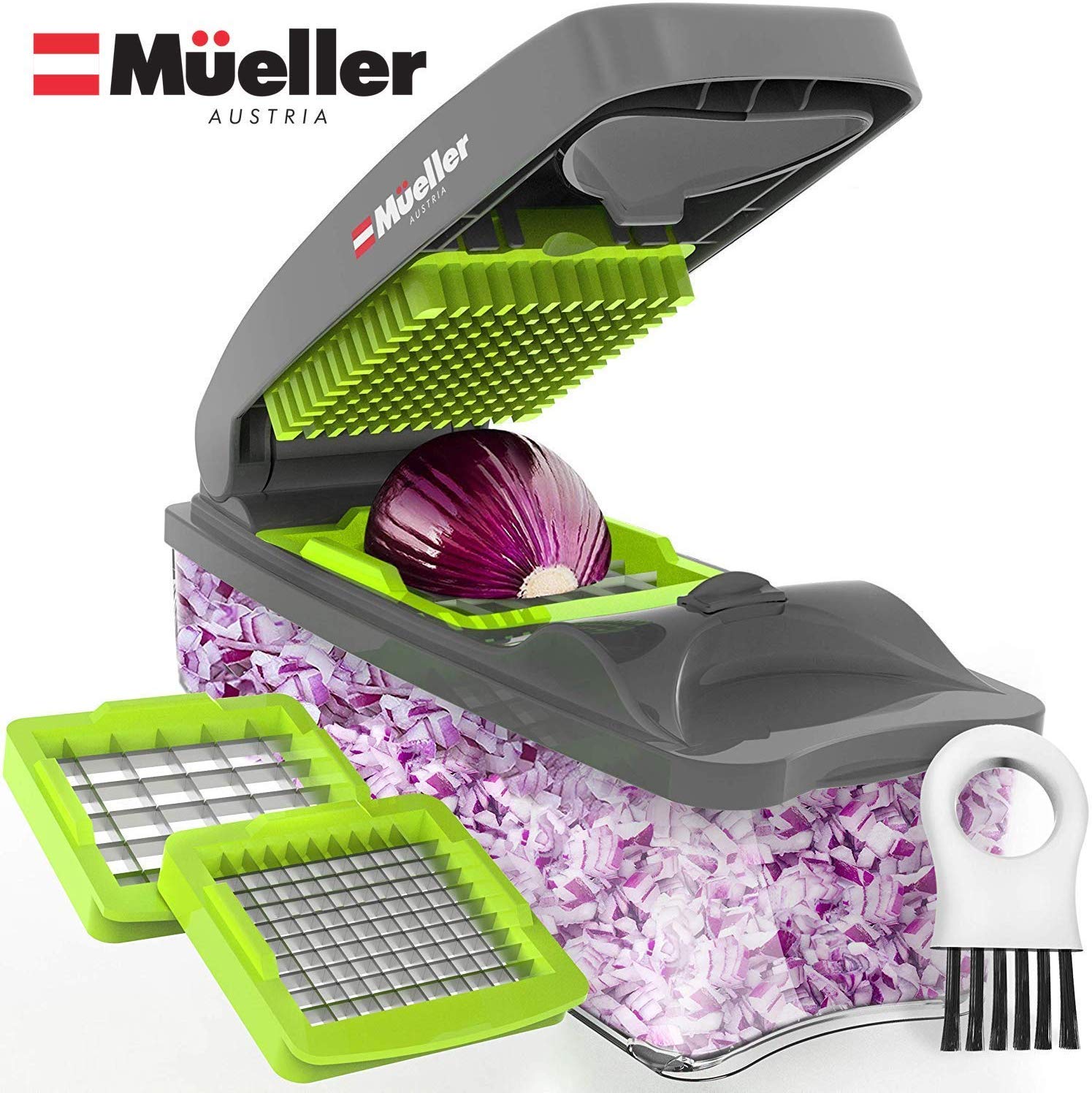 One of the best onion choppers on the market right now is the Mueller Onion Chopper Pro. This onion chopper has been rated as one of the leading manual appliances to have in your home because of its unmatched performance and power. The design of the Mueller Onion Chopper Pro was constructed so that you can use your time in the kitchen as efficiently as possible.  When it comes to his construction, the Mueller Onion Chopper Pro is made out of a BPA free professional grade material. You can expect superior resistance thanks to the reinforced food grade ABS top. You will also find two ultra sharp German 420 grade stainless steel discs. these are the discs that make chopping and dicing easier than ever. Because it was primarily designed for chopping onions, you will find that this onion chopper confines the onion vapors which in turn means fewer tears when you are chopping your onions. 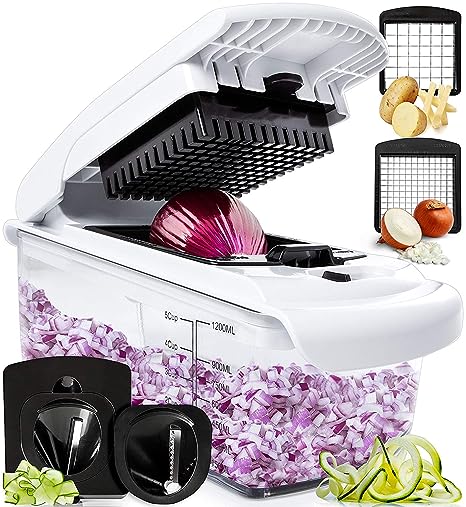 One of the best manual onion choppers to invest in is the Fullstar Vegetable Chopper. This easy and simple to use onion chopper features four interchangeable blades. These blades allow you to choose from everything between a julienne dice to a shop to a simple thin slice of your vegetables. When you are chopping, you are sure to love the built in chopping lid that lets you collect your vegetables without having to go to an external container. Simply chop the veggies you need and put them away in the fridge all in one go. The heavy duty 420 stainless steel razors are not only some of the best in the business when it comes to chopping vegetables, but they are also rust resistant. When you are swapping out the blades, you can snap them in rather easily so that you can get more chopping done in one session. Finally, users will love that there are several certifications that the Fullstar Vegetable Chopper adheres to. These certifications include being FDA approved and BPA free. Cleaning your full star vegetable chopper is an absolute breeze as well as it can be disassembled and placed in any dishwasher without worry.

Chop and dice your fruits and vegetables fine in seconds with the handy Kuuk Onion Chopper. This kitchen utility dices fruits and vegetables into perfect cubes and also helps in the preparation of salsa and much more. Thanks to its compact and lightweight design, it can be stored in the smallest amount of space in your kitchen.

Extremely simple and easy to utilize, all you need to do is hold down the device over your fruits and vegetables and press down. Made from BPA free premium grade plastic material and sharp stainless steel blades, this chopper is dishwasher safe and can also be cleaned by hand.

Featuring a razor-edged, ultra sharp grid, the Alligator Original Onion Cutter/Dicer cuts perfectly diced vegetables, fruits and much more. Made from premium grade, strong plastic materials with a high-quality stainless steel grid for dicing, this cutting tool is large enough to easily chop one onion at a time.

The dicer also comes with its own tool for cleaning out the bits that are stuck to the grid, which is quite useful when you consider the fact that it can also be washed in the dishwasher. 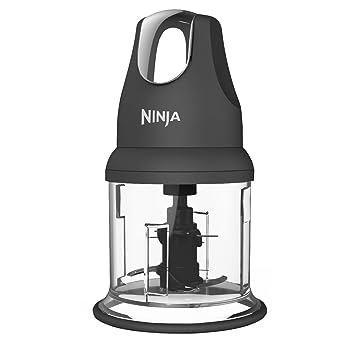 With one quick stroke, you now get the capacity to cut your vegetables and fruits into perfect dices in just a matter of seconds with the Alligator 11-1/4-Inch Dicer with Collector. With blades made from top quality stainless steel that is rust-free and ultra sharp, it comes with collector base that prevents the cut vegetables and fruits from spilling onto the floor and counter top. Giving you professional results, this dicer does not require any additional skills or talent. Extremely easy to clean and maintain, this device is safe to wash in any dishwasher. 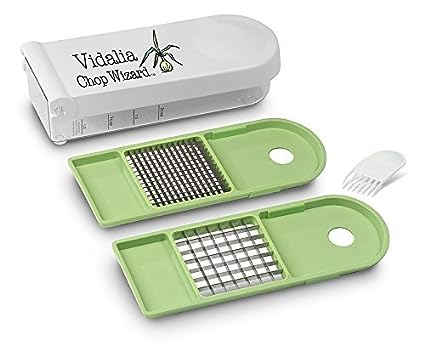 Featuring ultra sharp blades made from stainless steel, the Brieftons QuickPull Food Chopper is fast and efficient, making it easier to chop and dice without any effort. Equipped with a soft lid with added grip, a sturdy anti-skid base, a largely sized handle and an easy-pull cord, this device is versatile, durable and powerful.

Along with the ability to chop nuts, fruits, vegetables, meat, ice, and more, it also can prepare baby food, pesto, guacamole, hummus, herbs, and salsa. Furthermore, it comes with a large sized base for extra storage capacity and is made from high-quality plastic that is 100% free of BPA or any other potentially dangerous materials.

While some of you wouldn’t even consider onion choppers to be all that versatile in nature, they are in fact among the most flexible cookware accessories out there.

Although designed to essentially slice onions easier than any traditional methods, onion choppers can be used for a lot more than that. Having said that, let us find out how many different types of onion choppers are out there and what do they do.

Mandoline Slicers – These slicers mainly consist of a board with a sharp blade built into it. You operate such a slicer by pressing the onion against the board in an upward and downward motion to slice it piece by piece. Simple to use, this type of chopper/slicer is among the most widespread out there. It is also one of the simplest slicers you can get and also one of the easiest to clean when you’re done using it.

Alligator Slicers – The reason why these slicers are called the way they are is because of the two jaw-like parts built into the body of the slicers. The top jaw is usually equipped with several sharp blades designed to cut the onion into pieces. With the onion being placed between these so-called jaws, you operate the device by closing the jaws, thus causing the onion to get sliced.

Tower Slicers – With these slicers, you get a lot more versatility than you would expect. They are basically bins with lids that have blades going through them, a construction that makes them quite sturdy and resilient. You use this slicer by pushing an onion through the blades by using a top piece, a process that causes the onion to get sliced as quickly and as easily as possible without any real effort on your part.

Onion Slicing Guides – Despite their name, these are quite complex devices in their own right. While they basically look like multi-pronged forks, these slicing guides are quite easier to master and even easier to store. In terms of how they actually work, the process is quite simple. The prongs of the device are stabbed into the onion while a kitchen knife is slid between them to create even slices, a relatively effortless process.

Rotary Slicers – Rotary slicers, like the name suggests, work by feeding the onion into a shoot where they get cut into small slices. Although easy to use, rotary slicers are usually bulkier than simplistic choppers, which makes storing them a bit harder. Also worth mentioning is that rotary slicers can either be operated manually, with the help of a crank, or with the help of an electric motor.

Onion Scissors – Although quite rare, onion scissors are still pretty efficient in their own right. These slicers look just like regular scissors for the most part, albeit with multiple blades on each side. You operate onion scissors by placing an onion between the blades and the scissors, thus creating several even slices. The great thing about onion scissors is that they are very fast, which enables you to process multiple onions in a relatively short time span.

What To Look For In An Onion Chopper

Finding the right chopper isn’t as easy as some of you might be inclined to think. These simplistic yet much-needed tools come in many shapes and sizes as we already established, which makes it a bit difficult to find one that best suits your cooking style.

For the most part, you should judge onion choppers by the same standards you judge all food processing cookware, mainly by virtue of their construction and intended purpose.

In the process, you should always pay attention to the materials used in a chopper’s making, because although plastic slicers are usually cheaper, they also tend to break down a lot after just a couple of uses. You will find that stainless steel choppers are far more reliable in the long run, a reliability that comes with a price tag to match for the most part. Not only that but they also retain their sharpness longer than inexpensive choppers.

Last but not least, always consider the size of an onion chopper and the safety features it incorporates. Unless you’re planning to cook for many people on a regular basis, you should perhaps stick to the smaller choppers for home use. Feature-wise, you want a slicer/chopper that is equipped with safety features to prevent you from accidentally hurting yourself when you chop onions in a hurry. In general, larger choppers pose a much bigger threat when it comes to accidental injuries.

The Best Leaf Blower For Every Size Lawn

Can Whitening Toothpaste Cause Sore Gums?

The Most Durable Boots For Keeping Your Feet Their Best At...